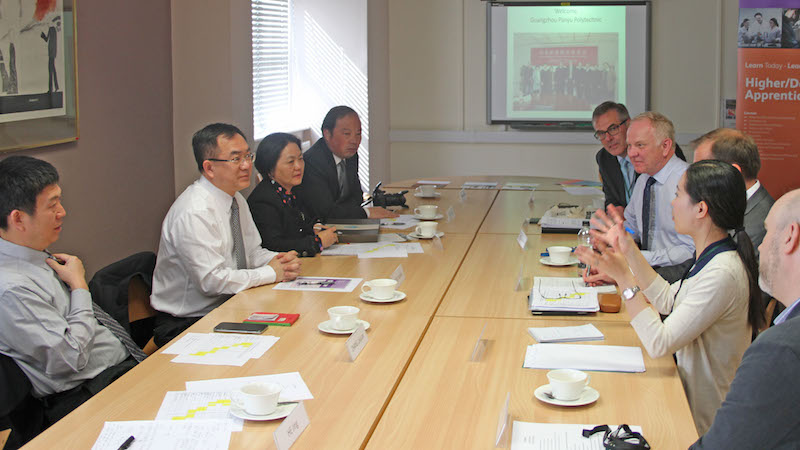 Bradford College has played host to senior staff from a leading institution in China to discuss a possible partnership.

The talks follow a visit by Roger Cunliffe, Higher Level Skills Leader at Bradford College, who spent six days at the Polytechnic in South China as part of a trip organised by the British Council, supported by the Association of Colleges and funded jointly by the Department for Business, Innovation and Skills and the Chinese Ministry of Education through the UK-China Partners in Education programme.

The delegation from China included Meng Yuanbei, Secretary of Party Committee at Guangzhou Panyu Polytechnic, Zhang Laiyuan, Dean of the School of Art, Yang Zewen and He Jing from the Teaching Affairs Office and Song Meimei of the International Exchange and Cooperation Centre.

The group were welcomed by senior figures from Bradford College including the Provost, Richard Thomas, and Group Chief Operating Officer, Gareth Osborne.

Both institutions are looking to collaborate initially in the area of mechanical engineering with a view to expanding into other areas.

Teachers from Bradford College are planning to visit Panyu Polytechnic later this year to assess the Polytechnic’s current position, advise on changes and train the Chinese tutors.