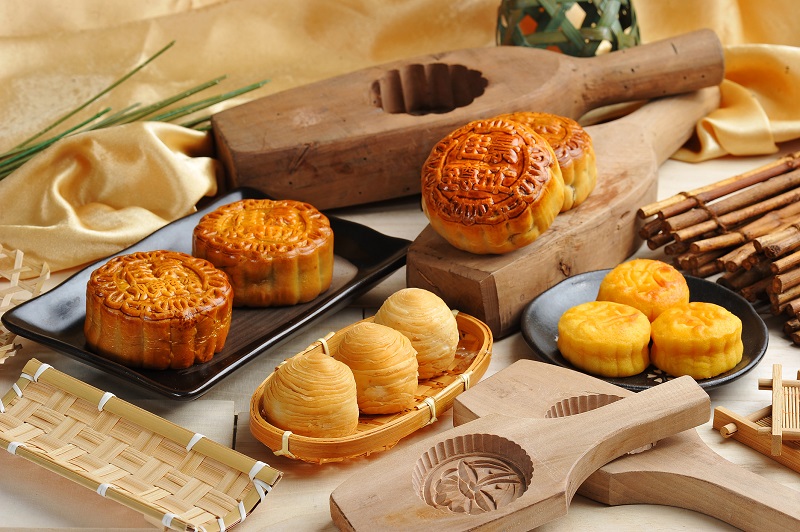 The Mid-Autumn Festival is a Chinese celebration second to only the Chinese New Year. Today is the date of this festival, based on the Chinese lunar calendar which is always on the 15th day of the 8th month, where the moon is at its fullest, roundest and brightest. The Chinese community in the UK will be celebrating with many events up and down the country over the next few days.

Come and celebrate this special occasion (September 18 2016) in London Chinatown between 12pm to 5pm, with mooncake and community stalls, stage, music and martial arts performances, lion dance and activities for children. There will also be 5 TVB stars making guest appearances.

The festival is celebrated with family gatherings and the eating of Moon Cakes. The making of Moon cakes and the design belong to high level bakery skills perfected over thousands of years. The pastry and crust are most often secret recipes whilst the filling consists of a lotus seed paste with a yolk in the middle. There are many different variations depending on which province the cakes are from, such as the Beijing Moon cake or Yunnan Moon cake.

A message from Chinese Liberal Democrats

“Chinese Liberal Democrats would like to wish everyone a very Happy Mid Autumn Festival!

Traditionally a time for reunions and for reflection, it is also a chance to think of family and friends who may be far away.

As the Song Dynasty poet SuShi had written, we may be 1000 miles apart but we still share and enjoy the beauty and light of the full moon.

Wishing all our friends and supporters health, happiness and 10,000 successes in your lives!”

“Middle Autumn Festival, also known as Moon Festival or Zhong Qiu Jie in Mandarin, dates back over 3000 years to moon worship in China’s Shang dynasty and was first called Zhong Qiu Jie in the Zhou Dynasty. It is one of the most important traditional Chinese festivals and falls on 15th or 16th August each year in the Chinese Lunar Calendar. The whole family will gather together for a meal, games, lanterns and worship the full bright moon.

For me, it’s especially meaningful to celebrate in the UK because I want to promote more Chinese traditions and culture along with Chinese New Year to a British audience and to strengthen the connection between the Chinese community and the British society at large; and also for the people whose families are far away from them, it is a nice way to keep their family close to heart”

To celebrate the Moon Festival on 15 September 2016, Royal China is offering diners the chance to purchase a box of traditional Mooncakes. The indulgent Chinese treats are made in-house by Royal China’s expert pastry chefs.