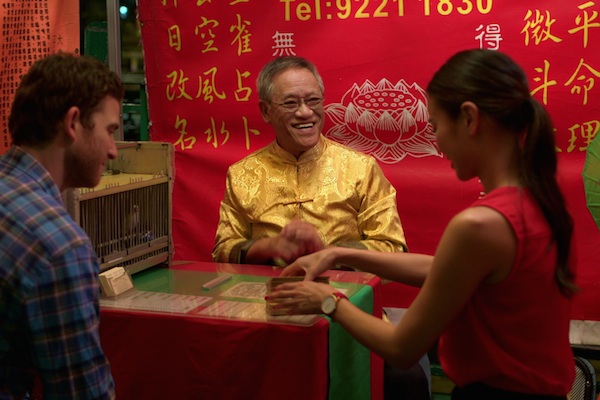 Scottish-Chinese Producer Sophia Shek raised in Forfar, and a graduate of Duncan of Jordanstone College of Art and Design, brings her first English feature film “It’s Already Tomorrow in Hong Kong” back to her home country. Sophia has worked behind the scenes on various film projects, including Transformers IV: Age of Extinction (2014) and Snowden (2015) but this is her first film to feature at the long standing Edinburgh International Film Festival.

It’s Already Tomorrow in Hong Kong, a romantic comedy shot entirely on location in Hong Kong, starring real couple Jamie Chung (Big Hero 6, Hangover Part II & III) and Bryan Greenberg (Friends with Benefits, How to Make it in America), had its world premiere at the 21st Los Angeles Film Festival (LAFF) from 10-18 June. Generating significant interest on the festival circuit, the film is also set to the 14th New York Asian Film Festival (NYAFF) at the end of this month.

The walk-and-talk romance follows the tradition of Before Sunrise using Hong Kong as its backdrop. Ruby (Chung) is a Chinese-American girl visiting Hong Kong on business for the first time, and Josh (Greenberg) is the American expatriate she meets while out looking for directions. The film also cameos veteran actor Richard Ng Yiu-hon, Malaysian beauty Sarah Lian and local indie folk rock band Noughts and Exes.

The film was recently well received in Los Angeles with The Playlist, Indiewire saying “the film is beautifully executed, with gorgeous cinematography and a lovely sense of rhythm”. Sophia says “I’m really excited and proud to bring this movie home to Scotland. Being able to showcase my first English language indie movie as the Producer at the Edinburgh International Film Festival is an absolute honour.”

The film is scheduled for Friday 19th June at Cineworld in Fountain Park at 20:20 and Sunday 21st June at the Filmhouse at 15:55.