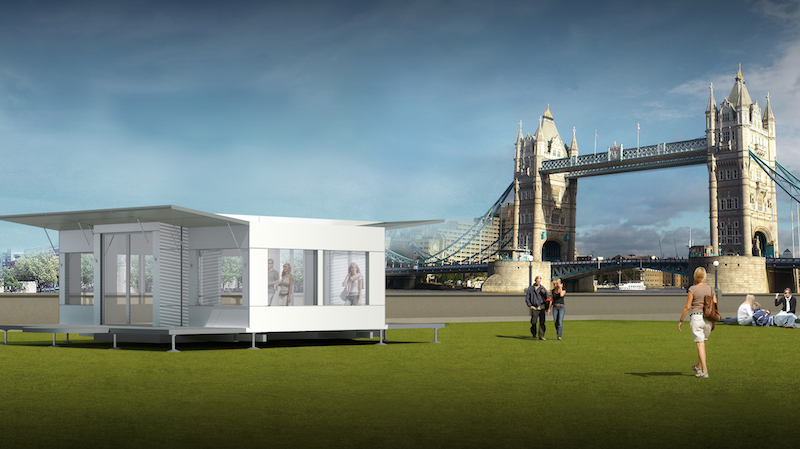 Nanjing Week in London is a cultural exchange programme between London and Nanjing, it is part of the London Design Festival and showcases a range of products and activities from Nanjing’s creative and cultural economy.

Nanjing Week in London will culminate in a cultural festival on Potters Field Park at London Bridge 23rd and 25th September. As a centre piece the festival will showcase the architectural and urban design of Movilla.

Movilla is a unique mobile, multi-purpose space solution created by one of Nanjing’s premier designers. Easily transportable, it expands on-site. This will be the first opportunity to see Movilla in the UK.

Created by one of Nanjing’s leading young designers, Movilla is a unique mobile, multi-purpose space solution. Easily transportable, with energy generating solar panels and energy and water saving features, it is innovative, eco-friendly and endlessly adaptable for various uses. It expands on-site within 5 minutes from its minimum size of 8m x 2.4m x 3m to its maximum of 11m x 6.5m x 3.2m. Adhering to the highest sustainability standards; Movilla is a zero-emission design. A number of the latest generation energy-saving technologies, including solar panel and temperature and humidity control technologies are integral to the design.

This will be the first opportunity to see Movilla in the UK against the striking backdrop of Tower Bridge.

Movilla will be open to the public over the weekend, who will be invited to come and learn more about its sustainable design and its potential application. The weekend will also feature musical, cultural and creative events from Nanjing.

Nanjing is one of China’s largest and fastest growing cities with a population in excess of 8 million. Nanjing means “southern capital” and was China’s capital city for 300 years during the Ming Dynasty. It is an important educational and cultural centre, and with over 50% of its economy in the service sector, Nanjing is a vibrant engine of new business growth and innovation for China. It is an important catalyst in the internationalisation of the Chinese economy; pushing forward into global markets and the higher value- added sectors of design and the creative economy.