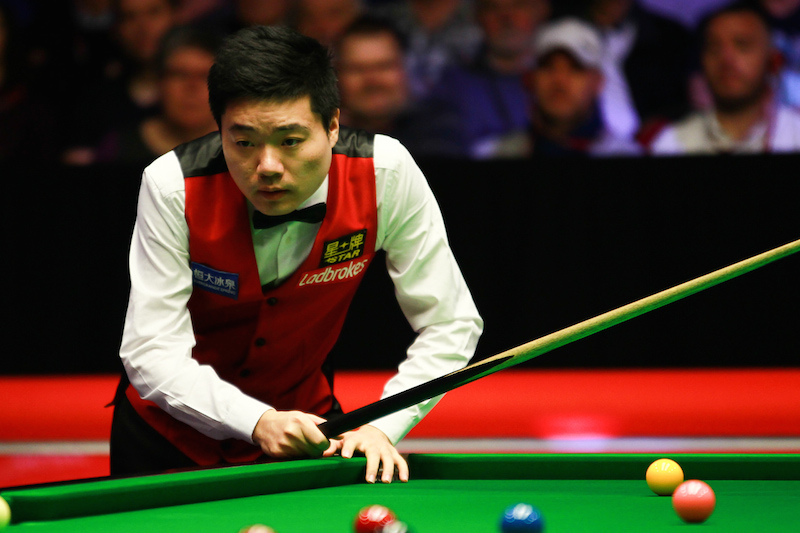 China’s growing influence on the sport of snooker is in the spotlight this week as the Shanghai Masters tournament takes place.

It’s the tenth anniversary of this prestigious world ranking tournament – having first been staged in 2007 – and the sport’s biggest names, including Ronnie O’Sullivan, Ding Junhui, Mark Selby and Judd Trump, are in Shanghai contesting the title.

Over the past decade, the popularity of snooker in China has exploded. Over 200 million people watched this year’s World Championship on national broadcaster CCTV, and later this year World Snooker plans a far-reaching digital rights deal in China which will bring coverage to an even wider audience.

Major cities like Beijing and Shanghai have hundreds of snooker clubs, while in many schools around the country, thousands of pupils play regularly. The discipline, sportsmanship and mathematical elements of the sport make it attractive to local government, sponsors and educational establishments.

The World Snooker Tour has five major tournaments in China this season, with combined prize money of £3 million. The top players are among the most famous sports stars in China and they are welcomed to events with red carpet walks, surrounded by crowds of enthusiastic teenage fans.

How has snooker spread so dramatically in China? The catalyst was the emergence of Ding Junhui, the most successful ever Asian player. In 2005, just a few days after his 18th birthday, Ding won the China Open in Beijing, his first professional title. In the final he proved his potential by beating all-time great Stephen Hendry. Since then, Ding has won a multitude of trophies and even matched some of Hendry’s records. He is now aged 29 and has won a total of 11 ranking titles – only six players in snooker history have won more.

Ding’s success has inspired a generation. Snooker had traditionally been dominated by British players, but Ding went to the heartland of the sport in the UK and beat the best at their own game, capturing the imagination of millions of followers in his home country. He has won several awards for sporting achievement in China and remains a hugely popular role model.

Snooker was invited by British army officers out-posted in India during the 1870s and its administrative hub has been in the UK ever since. The professional tour is run by World Snooker, which is controlled by Matchroom Sport, a major sports promotion and TV production company, chaired by charismatic Barry Hearn.

Hearn was involved in snooker back in the 1980s, when he managed players including Steve Davis, before he moved away from the sport and focussed more on darts, boxing and football. By 2009, professional snooker was at a low ebb, with few sponsors, only six ranking events per season, and total prize money at just £3.5 million.

Desperate for a revival, snooker’s professional players voted for change at the top. Hearn put forward a proposal for an overhaul of the sport. A vote took place in the summer of 2010 when the players went in favour of Hearn, by a narrow 35-29 margin. It was a critical moment in the sport’s history.

Within an incredibly short space of time, the administrative and commercial facets of snooker were channelled on to the right path. TV deals were struck. Sponsors were signed. New tournaments with distinctive formats were created. Relationships were built with national governing bodies worldwide. Strong anti-corruption measures were put in place. And the upshot is that snooker is now watched by nearly half a billion people in 89 countries across the planet.   Today, there are 19 ranking events and the prize money figure has gone above £10 million for the first time.

And Hearn remains ambitious about future expansion with the long term goal to bring snooker to the level of tennis and golf. “Now we are looking to the future because complacency is a killer and we won’t fall into that trap,” he said. “We have recently announced very significant broadcast and sponsorship deals and there will be more to come. Prize money will keep going up and by 2018 the winner of the World Championship will receive £500,000. And we continue to look around the world for new opportunities to stage new tournaments. I believe within the next five years we will see things that no one would have thought possible in our sport. This is only the beginning – if we started at base camp in 2009, now we’re not even half way up the mountain. I am never limited by anything other than my own imagination.”

Working alongside Hearn at snooker’s helm is Jason Ferguson, who is Chairman of the World Professional Billiards and Snooker Association, the sport’s governing body which leads the way on rules and regulations, discipline, grassroots and participation. Ferguson’s ultimate goal is to get cue sports into the Olympics, and while a bid for a place in the 2020 Games in Tokyo narrowly failed, he will try again for 2024.

Ferguson spends several months a year in China helping to develop snooker in partnership with the Chinese Billiards and Snooker Association. An official academy in Beijing has produced a string of gifted young players to follow in Ding’s footsteps. Two of them, Yan Bingtao and Zhou Yuelong, were aged just 15 and 17 respectively when they won the snooker World Cup event in 2015, beating Scottish stars John Higgins and Stephen Maguire 4-1 in the final.

Sheer weight of numbers suggest that Chinese players could dominate snooker in years to come. Among the 128 players on the professional tour, there are 17 from mainland China – more than ever before. And an abundance of talented amateur players are coming through.

But talent alone is not enough. As long as snooker’s hub – and the majority of tournaments – remain in the UK, the young Chinese players must leave their friends and family behind and move base 5,000 miles due west. The personal challenges they face away from snooker, embracing a very different society and culture, are often greater than those they face on the green baize.

Victoria Shi is from China but lives in Sheffield with her English husband and their daughter. She has been involved in snooker for nearly a decade, initially as a journalist and then as a players’ agent, and she managed Ding during one of his most successful spells. Now she runs the Victoria Snooker Academy in the heart of Sheffield.

“I have eight Chinese players there, and there will soon be more coming,” said Victoria. “The youngest is Yan Bingtao who is 16. Of course it is hard for them when they are teenagers to move away from their families and friends. But it helps for them to be all together here. They share accommodation and there is plenty for them to do in the middle of Sheffield like going to the gym and restaurants.”

“I encourage them to mix with the British players and take English lessons which helps them settle more quickly. Of course there are a few who find it hard to live here, no matter how good they are at snooker. Sometimes it’s better for them to stay in China until they are a bit more mature. It was harder for Ding when he first came to the UK at the age of 15. He was the first one and he didn’t speak any English so he had to be very strong to succeed. Now they can all practise and socialise together.

“I encourage discipline and structure for them, for example during the build up to a tournament they have to arrive for practice every day at 10am. I speak to their parents regularly to let them know they are enjoying snooker and doing well. I’m confident we’ll see more Chinese players winning tournaments because they have so much talent.”

The title Ding craves the most is the World Championship, snooker’s flagship event which is staged every Spring at the famous Crucible Theatre in Sheffield, not far from his house in the quiet suburbs of the Yorkshire city. He came closer than ever this year, reaching the final for the first time before losing 18-14 to Mark Selby. Hearn has insisted that the tournament will remain in at the Crucible rather than moving to Asia, and recently signed a ten-year deal to keep it in Sheffield. But it seems inevitable that, before long, Ding or one of his gifted fellow countrymen will become World Champion, and that will take the popularity of snooker in China to the next level.