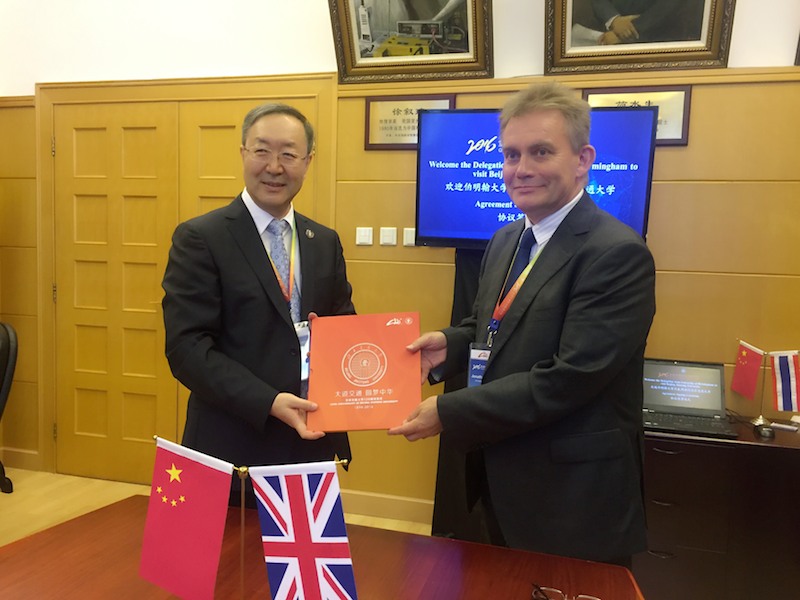 The University of Birmingham has signed an agreement with Beijing Jiaotong University (BJTU) in a partnership that will offer Chinese engineering students the opportunity to study at Birmingham.

Students at the Chinese university will spend the fourth and final year of their degree studying their choice of engineering modules at Birmingham. They will then have the opportunity to pursue a Master’s degree programme in their chosen engineering field at Birmingham.

Professor Jon Frampton, Director of the China Institute, Deputy Pro Vice-Chancellor (China) signed the agreement on behalf of the University of Birmingham, whilst attending a conference in Beijing marking the 120th anniversary of BJTU.

Professor Frampton said:  “Signing this agreement with colleagues at Beijing Jiaotong University marks the start of an exciting new era of close collaboration between our two universities in the key field of engineering – particularly relating to railways.

“It is testament to our growing reputation in China and presents another exciting opportunity for the University of Birmingham to work in partnership to deliver high-quality education that has a global impact.”

BJTU Vice-Chancellor Professor Feng Chen said “This new agreement sees a closer and stronger partnership between our two universities and places a high value on our solid cooperation in the field of rail traffic control and security.

“I hope that, after reaching a consensus, we see further progress in establishing a Sino-UK Rail Research Centre and the enhancement of rail expertise and opportunities in both China and the UK.”