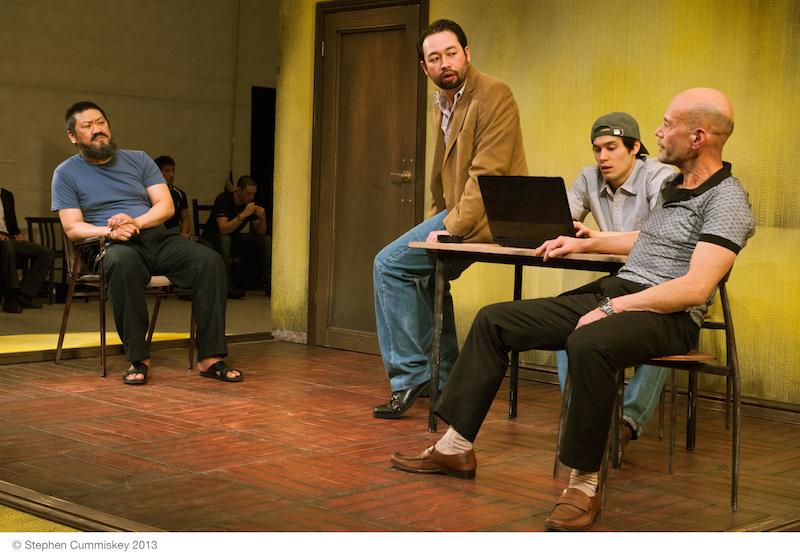 David Lee-Jones’ stage appearances include Skin in Flames (Park Theatre) and #aiww: The Arrest of Ai Weiwei (Hampstead Theatre). He has also appeared in “traditionally white” roles in Western classics including by Shaw, Coward and, above all, Shakespeare. He is an Artistic Associate of Yellow Earth Theatre and Artistic Director of Wild Consort.

Acting is not guaranteed as an easy career path for anyone, but British East Asians may be justified in believing they get a particularly raw deal for opportunities on stage or screen, even compared to other minorities.

As for non-race-specific roles – roles that an actor of any race SHOULD be able to play – they tend to be kept white by unconsious bias and a lack of imagination.

All this means that British East Asian actors rarely get an equal chance to build their experience in a professional context or to develop the industry contacts and trust necessary to advance their careers. It’s a drama-school commonplace that there are no such thing as small roles, only small actors, but anyone who isn’t extraordinarily lucky in this business learns fast that small roles have to be their own reward, particularly on screen. If you only ever get seen for one-line parts as “Chinese waiter” or “Chinese prostitute”, how can you possibly build a career? And how can you get the industry to see you seriously as more than that?

Accordingly the core industry gets away with maintaining its low expectations of our potential. In the last couple of years we’ve seen maybe one or two East Asian faces regularly on British TV but it’s hardly blown wide open or fully escaped the “otherness” trap. There have certainly been a handful of higher-profile theatre productions in London that have accorded weightier roles to British Chinese actors but this is soley on the very rare occasions when a play focuses on a Chinese theme, and even those same theatres seems to struggle with the concept of integrating East Asian actors into their casts as a matter of course.

This is a wider issue than one of employment. We are all seeking to establish for ourselves and to the wider society what it means to be British Chinese. That isn’t possible when we are made relatively invisible, in public life and in fiction. I have a young nephew and niece with Chinese heritage, and I demand the right for them to find mirrors in the stories they see.

I am a frequent theatregoer and at almost every play I attend on the fringe or in the West End, I feel this exclusion. Every time there are roles that did not NEED to be cast as white, but were. I’ve been told to my face that only white actors should play Shakespeare. “We aren’t allowed to play Chinese, so you don’t get to play white,” runs another argument.

Sadly, it seems a lot of the time we don’t get to play either. This is exactly what is happening at The Print Room, a theatre in Notting Hill staging “In the Depths of Dead Love” early next year. This is a new play by Howard Barker set in Ancient China with, it has been announced, a cast of four white actors.

When a production of a modern play comes along where the lead characters are written as Chinese and then white actors are cast in every single role, it isn’t just that our careers are being stolen from us. It’s that the dominant culture is taking for itself our very right to any representation of ourselves. The Chinese body becomes abstracted as a stage Chinaman, and conforms to whatever orientalist assumptions the story requires. There’s a long, ugly history of this and it’s still appropriate to call it yellowface even if there is not literally makeup being applied – the practice is if anything more pernicious because it’s easier to get under the radar.

Perhaps not any more. Ever since the “Orphan of Zhao” casting controversy in 2012, when the Royal Shakespeare Company was bombarded with passionate, strongly worded – and often witty – complaints regarding its racial insensitivity, the British East Asian artistic community has been finding its voice with increasing authority. Over the last three days the Print Room has faced a Twitter storm regarding its insulting, tone-deaf decisions and, incredibly, has yet to respond. The sense I get is that an apology will now be insufficient; utter contrition and strong evidence of a genuine (and overdue) commitment to include East Asian artists in their future output is the minimum required.

Do let them know on Twitter at @the_printroom if you agree.

I argued a long time for colourblindness but I don’t believe it’s a useful term any more. It’s become a way to repress discussion of these issues under the pretence that there is a level playing field, that the creative industries and wider society are perfect meritocracies. Every single person of colour will tell you that is not the case, so a better aspiration than colourblindness is colour awareness. A casting decision is a political act that informs the dialogue between the artists and the audience, and we should not be encouraging anyone to claim that they “don’t notice” race. Better that they notice, and they talk about it. This year the UK and US have been thrown into turmoil by white voters with anxieties about immigration and national identity. A frequent complaint is that they arent “allowed to talk about race”. So let’s bring on that discussion, and one of the ways we can do that is through the simple fact of the bodies that we are able to place into stories on our stages and screens.