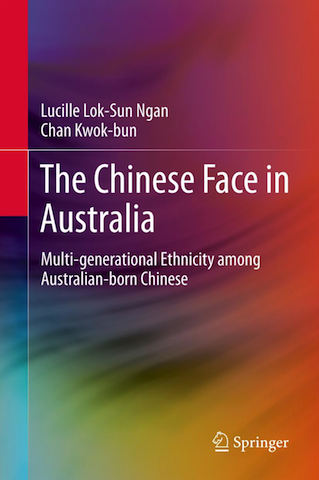 Dr Ngan’s work on the Australian Born Chinese (ABC) echoes that done in the UK with British Born Chinese; with a focus on the role of migration history, the nature of identity, and Chinese identity when part of an ethnic minority grouping. I first referenced Dr Ngan’s work when making the connections between experiences of migration and settlement outside of mainland China, so was pleased to read her new co-authored book, as well as be able to have her response to some questions for this article.

The book takes a reflective approach, early on we are introduced to the personal understandings and impacts of being Chinese on the authors. Two early chapters also present in-depth accounts of one female and one male participant from the book’s primary research. The impact of this approach is to ground the later, theoretically informed, discussions which address wider concepts such as race and cultural identity in Australia. Key questions are addressed such as what is the impact of being Chinese several generations after ancestors migrated? How have social attitudes to Chinese migrants changed? What are the identifications of those ABCs now and how have they changed over time?

I certainly would note the keen balance struck in the book, between highlighting the relevancy of individual and life accounts, alongside demonstrating the usefulness of such studies. Not merely an exercise in social enquiry, the questioning of what it means to be Chinese and Australian allows and invites wider debate, and questions, about how we treat others, are raised, and what we value. The power of a reflective approach is also to record life-history and allow those with a Chinese ethnicity or mixed background a voice; through which their experiences and views can begin to be integrated into Australia as a nation.

While the book is academic in tone, it is also accessible for those interested in changing societies and the impact of modern migrations, the role of transnationalism, and changing role and relationship between nations, origins and nationality. Those interested to compare and contrast experiences in the British Chinese case with Australia would also find much here to strengthen debate, which challenges the idea of there being one Chinese identity, yet also showing why this identity remains relevant today.

Questions and answers with Dr Ngan

I first read your article on Australian Chinese. Second and third generation Chinese spoke about how using chopsticks, and giving red pouches, remained practices in families, but other things like Chinese language, may not. Did this cause any reflection with your own upbringing? What drew you to interview and work qualitatively with these participants?

I have always had questions about my identity even as a young child. When I was growing up in Australia, I used ask my mother, “Am I Chinese or Australian?” I was born in Hong Kong and migrated with my family to Sydney in primary school. As a child, it was necessary to conceal my Chineseness at school to successfully blend in with the mainstream and to find a sense of belonging and acceptance. At home, however, I had been practicing Chineseness. Like my informants, within the home, we celebrated Chinese New Year, ate Chinese food.

Family rituals often have a symbolic meaning for family members and they reflect family traditions closely associated with cultural and ethnic perspectives and practices. One aspect of this book explores the salient functions of rituals; while they may only be symbolic, they nevertheless play an important role in enhancing the ethnic identity of subsequent generations.

I have always found myself caught in-between and my cross-cultural encounters have compelled me to ask many questions.  I wanted to know what happens to the identity of subsequent generations of migrants?  How do those with long-term residence in Australia “construct,” “do,” and “perform” Chineseness? My research has evolved from my puzzlement about identity as a child, to a sociological investigation that examined identity formation in the lives of long-settled Australian-born Chinese in Australia.

Another interesting point you have reflected on is the use of Chinese names and Chinese language in your own life. Could you say again for the readers something of your experiences here?

Names are an interesting point of discussion. It represents yourself, your identity – it is about how you see yourself and how you want others to perceive you. The continual subtle changes in my name perhaps illustrate my own unconscious negotiation of my ethnic, cultural identity and other identity dimensions of gender and age in the course of my life.

Unlike English names, Chinese names often have a poetic resonance and often much time is taken to create a particular individuals’ name. For some of my informants, they had Chinese names given to them but some were reluctant to acknowledge or use it. I think reflecting the changes in your name enables one to understand oneself more.

In terms of academics and issues of identity and ethnicity, I wonder, do we perhaps through our research somehow become a part of what we study as we are documenting people’s lives and thoughts? In what sense then might we also become a part of the discussions we are trying to look at? Hopefully you might name some useful sources to readers interested to know more.

During my research, I found myself also holding onto preconceived stereotypes even though I was attempting to deconstruct the essentialist notions of Chineseness. A few of my informants had a “Western” appearance, so nothing “Chinese” in terms of physical features, and I remember my bemusement initially upon meeting one such informant. Trying to hide any hint of surprise, I thought to myself “she looks nothing like a Chinese.” As a researcher, I have to admit that I was also conditioned by normative social constructs of “Chinese.” These kinds of reflections reaffirm that social constructs have slipped into the unconscious even though one may be consciously questioning the processes involved.

The persistence of Chineseness is largely associated with the fact that ethnic minorities are compelled to confront Chineseness as an inescapable “reality” throughout their lives because of the visual physicality of the Chinese face in a “white” society – whether or not they willingly choose to identify as “Chinese.” Yet the process of authentication which inevitably impacts on the hierarchical stratification of identity is also deeply embedded within the Chinese diasporic world. This “reality” of physicality inscribes them as others throughout their life course; it is a constant reminder of their marginalized status.

What are your hopes and aims for the ongoing study of Chinese people/issues in the areas you are working?

Scholarly research in this field has focused mostly on the experience of recent overseas Chinese migrants and they typically lack a long-view lens on subsequent generations. While the concept of hybridity confronts and problematizes the unsettling boundaries of identities, the identity of later generations is still largely subsumed under the traditional models of assimilation, which expect ethnic identification to decrease over successive generations. Consequently, this has led to a lack of in-depth research and theorization on the identity formation of descendants of early Chinese migrants in Australia. Also research on in-group dynamics has not received the attention it deserves.

Currently I am researching the experience of cross-border children who reside in the Mainland but travel to Hong Kong for schooling on a daily basis. The construction of their identities is very interesting, like overseas migrants they are living in-between two social spaces. However, because they are Chinese moving within China, their identities and sense of belongingness have not really been explored. It would be great to see more work done in these areas.

In terms of significance what are the sources you have drawn on for inspiration in research?

There are a wide variety of sources that have stimulated my work, Simmel’s (1908) concept of the stranger has been particularly inspirational.

The book ‘The Chinese Face in Australia: Multi-generational Ethnicity among Australian-born Chinese’ co authored by Lucille Lok-Sun Ngan and Chan Kwok-bun is out now and can be followed up at the following links: